Not too long ago, my buddy Dustin and I were working on his S670, getting it ready for harvest. He’s a farmer in northern Iowa, and his combine is getting up there in years. He was debating over whether to continue to repair it, trade up to a different used model, or buy a brand new one. Dustin knows his equipment better than just about anybody I know, but I could see that his head was spinning. With so many options on the market right now, I’m sure he’s not the only one!

One of the unknowns he was wrestling with was about the transmission. Is a John Deere ProDrive (essentially an IVT system) the way to go, or is a conventional 3-speed the better idea? Try Googling that question sometime; you’ll find so many passionate opinions on the ag message boards that you’ll give yourself a monster of a headache! Eric in western New York says, “ProDrive is a must have!” Two lines later a guy in southern Illinois comments that he absolutely hated the one he’s got now and he can’t wait to get rid of it!
While the debate still goes on, the general consensus is that ProDrive transmissions make better use of torque from the motor. In turn, that makes it easier to maintain speed in the field (especially useful in hilly ground like Dustin’s). The trade-off for the increased efficiency is that the option itself is more money when they’re new, they’re slower on surface roads, and depending on who you listen to, they’re a lot bigger headache when they break.
So, to try and help Dustin, I told him I’d do some analysis on it using our Iron Comps data to see what effect ProDrive had on residual value. I couldn’t help him weigh all of his unique pros and cons. That said, I do have access to a huge database full of farm equipment auction results. I knew that I could help him with the numbers aspect.

I’ll admit, I was curious as to how it would shake out. I knew there would be a “ProDrive Premium”. But at some point, I figured there would be a point where that started tailing off. I also wondered if there was a point where the 3-speed became a better option.
I made a call to a local dealer and found that an S670 with ProDrive sold for about $428K in 2015 (ProDrive was a $7K option). So with that baseline number, I went into our Iron Comps database. It’s powered by Tractor Zoom’s auction data, and captures over 55% of the market, more than any other source. We’ve got close to 150 S670 sales just within the past two years in the database. It’s a numbers game and the bigger the data set, the more confident we can be in our results.
The table below breaks down the values even more into three scenarios of combines with 600, 1200, and 1800 hours. The first row shows the expected average value for ProDrive S670s. The second row is the expected value of a S670 with a 3-speed. The bottom ‘ProDrive Premium’ percentage is the amount that could be attributed to the ProDrive for that age of combine.

The results for the newer combine affirm what ProDrive advocates have been preaching. A ProDrive in our dataset with 600 separator hours should sell for about $185K at auction. Its 3-speed counterpart, just $163K! A difference of $22K (13% premium) is a lot bigger number than the $7K option when it was new! This indicates that there’s definitely a demand for these combines – especially those without a ton of hours!
As the combine ages, so does excitement for the ProDrive. So much that it is essentially negligible at 1800 hours. A likely explanation is the cost to repair a ProDrive, which older machines are more likely to need. Typical repair bills for out-of-warranty transmissions are fairly steep. Based on what I’ve heard, you could be looking at $25-30K to replace a shelled transmission. Not a small number. I can definitely understand why the premium starts to fall. 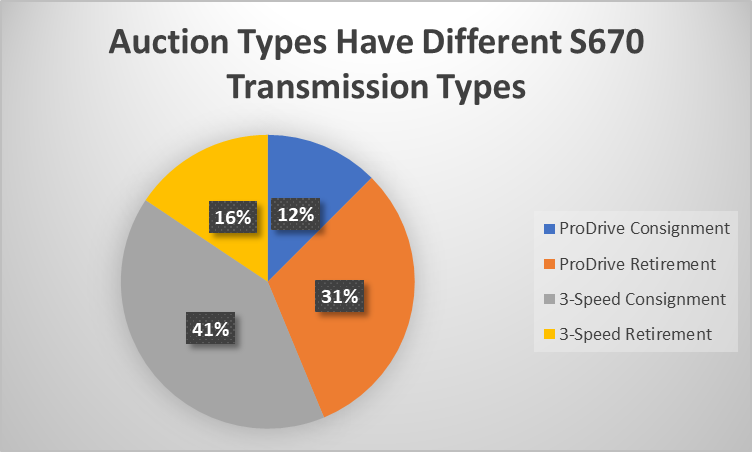 As one final check on this pro-ProDrive conclusion, I like to filter down by auction type. Retirement auctions tend to bring higher premiums. Consignment sales tend to be lower and represent the market value floor. The unexpected challenge I discovered was that few S670 3-speed combines hit the retirement market. Conversely, we haven’t seen a lot of ProDrives selling at consignment sales. I’m still working on determining why this happens.
I showed these numbers to Dustin the other day over a beer, and it pretty well confirmed what I think he needed to hear. When I left the shop, he was on his tablet browsing combines at Tractor Zoom, and I’m sure he’ll find a nice ProDrive S670 at a retirement sale somewhere.

A modified version of this article originally appeared on the Iron Comps blog a few weeks ago.